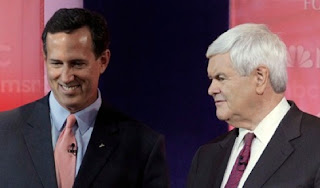 Mitt Romney has won the most delegates so far, but has yet to secure the nomination of his party.  The conservative vote is split between Rick Santorum and Newt Gingrich.  If Santorum and Gingrich combined their vote totals in each election, they would easily win over Mitt Romney.  Given the fact that the Republican Convention is at the end of August, the Republicans cannot wait until the convention to choose a candidate because that will leave only 60 days to run against President Obama in the general election.  So why don’t Santorum and Gingrich have a conversation and agree that one of them drop out so the conservative vote can be combined to beat Romney?  The answer?  Ego.
Politicians are in it for themselves, not us.  It’s all about them, and it’s always been about them.  They tell us what we want to hear during election season.  We joke about it, and we just accept the fact that politicians are just that way.  They make eloquent speeches that express lofty goals for the country.  They talk about how the person currently holding the office is taking us in the wrong direction.  They tell us that they have the answer, and can take us in a different and “right” direction.  They make us think that the election is about us when in reality, it’s about them.
Gingrich and Santorum agree on most issues.  The difference between their positions is marginal at best.  If they both cared more about their party than themselves one of them would have bowed out by now.  Instead, they both have the same strategy – stay in until the convention and take their chances in a brokered convention.  That might be great for them, but it’s political suicide for their party.  So why are they pursuing that strategy?  Because it’s about them!
What’s the downside for Santorum or Gingrich, or for that matter, any politician?  If they win, they serve for awhile and then make money either by being a lobbyist, or by making speeches and/or writing books.  If they lose, they’ve gained name recognition and can get on the speaking circuit, work as a TV commentator, or write books.  It’s a no brainer right?  The bottom line is politicians use us for their own personal gain.  It happens over and over, and we fall for it every time.
If Gingrich and Santorum really cared about beating President Obama they would rally around Romney because he is clearly leading in terms of wins, and delegates.  The party cannot afford to wait until late August to nominate their candidate.  If they really cared about their party they would put their ambition aside. They would give the country the best chance to elect a Republican.  They would drop out now and rally behind Romney.  But, they won’t  do any of those things because you guessed it – it’s all about them.
(Photo credit: teaparty.org)