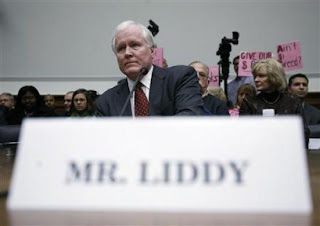 I’ve been watching AIG CEO Edward Liddy testify before the House Financial Services Subcommittee on Capital Markets, Insurance, and Government Sponsored Enterprises. He is taking heat from the congressmen over some employess receiving retention bonuses from AIG. Because AIG received a loan from the government, the representatives are upset about the so called bonuses.

What the representatives fail to realize is that these bonuses were crucial in convincing some people to stay at AIG, knowing their job would eventually be eliminated. Had the bonuses not been put in place many of the employees would have simply left to find other work, and AIG would be in a worse position.

The representatives seem to be grandstanding for the cameras and grilling Mr. Liddy who receives no pay from AIG, and has no financial incentive to do anything unseemly.

Have you ever noticed in these hearings that the Representatives or Senators are there for their camera time, and then they just leave? Are they not interested in hearing the other questioner’s questions? Of course not.